Mayor For the Day

Today, Luke got to run the City of Tyler.

Good thing he didn't get to make *all* the decisions, as I'm pretty sure he was gunning for reduced school hours and ice cream shops on every corner.

He did get a lot of requests from constituents, though. Some wanted him to get rid of all the medians in the city. Others wanted lower taxes. One asked for more days off. And from what Luke reports, several city employees stopped him to request a raise. He told them no, he didn't bring his wallet to work today.

Luke has wanted to be the mayor for a little over a year now. We discovered this goal when his most wonderful first grade teacher, Julie Pope, had a "career day" where the children were to dress up as what they wanted to be. We talked about the usual suspects: firefighter, policeman, baseball player...all the things that his friends were saying they wanted to be.  But Luke explained that his dream job was to "clean up the city." But did didn't mean city sanitation. "You know, get bad guys in jail, help make decisions and stuff like that," he told us.

Then we explained the job of Mayor to him. He met Mayor Barbara Bass on several occasions. And who isn't impressed with Mayor Bass? He was hooked.

So when Bids for Kids, an online auction raising funds for CASA for Kids of East Texas, offered one lucky bidder the chance to be Mayor for a Day, I jumped all over it.

He prepared by playing his Nintendo DS at my office. (Admit it, Mayor Bass, you have a DS hidden in your desk drawer, don't you?) 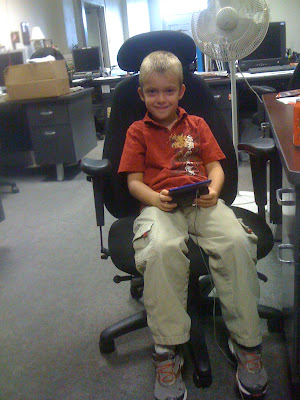 Then we went over to City Hall.

There it was a whirlwind of activity. In rapid succession, Luke met the Police Chief, the Fire Chief, greeted the Mayor and shook hands with the Council. Before the City Council meeting, he was given a certificate of appreciation from the Mayor 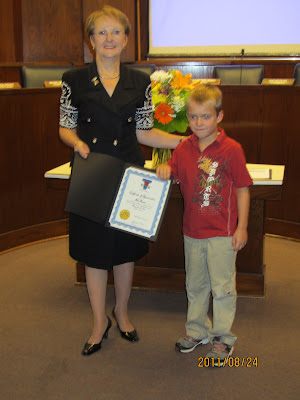 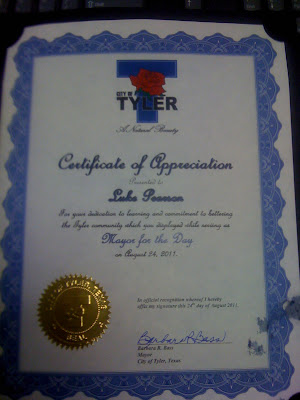 He finally consented to getting a picture with Mom and Dad too. 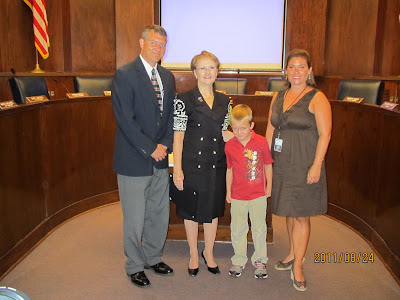 But then he made us leave.

Luke went to the police department. "It was cool."

He went to the Fire Department. "It was cool."

He accumulated a mass of booty. "Mom, I got COOKIES."

He also got a fire department ball cap, T-shirt and special coin.

Oh, and cookies from when they took him out to lunch. 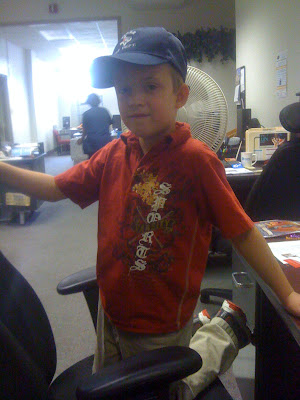 When I went back to City Hall to pick him up, he was running amok in Council Chambers (you didn't just read that, Mayor Bass), wielding the Mayor's gavel like a baseball bat. (If questioned, I can neither confirm nor deny the veracity of this story).

"I think the firefighters gave him lots of sugar and Dr. Pepper," Heather from Communications told me. 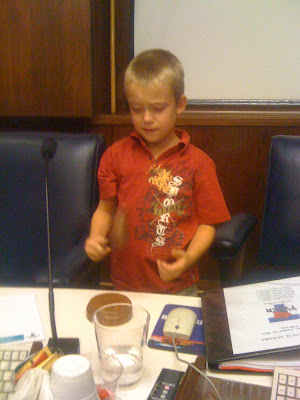 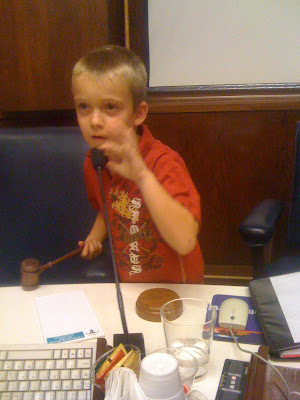 Whatever they gave him, today was a day he'll always remember.
Thank you to Mayor Bass, City Council, the Fire Department, the Police Department, the Communications Department and Heather Squared for making Luke's day very special.
Posted by Amy Brocato Pearson at 1:47 PM