It only takes a near-death experience...

to snap you back into the harshest reality there is.

No, it wasn't MY near-death experience, but when one of your BFF's (and I don't mean BFF in text speak, slang or modern-lingo) I mean "BFF" like this-woman-is-part-of-my-heart,  has a massive heart attack at age 42, it brings things into focus.

I haven't written anything in over a month. Because life was been happening at warp-speed.
But the heart attack slowed everything down (everything but work, which is an entirely different story). And brought things into focus.

It was a Thursday afternoon, just like any Thursday afternoon. It was going to be Girl's Night Out, as all Thursdays were. A little sushi, a little live music, maybe some Mac-N-Cheese at our favorite place, Cork. Then I get the call from L, who asked, in panicked voice, "Have you heard from K?"

All L could make out was "ETMC" and K's daughter's name. A check of the day care confirmed little K was still at her after school program. So it had to be big K at ETMC.

L went to the hospital. I met L at the hospital to pick up her baby. C picked up little K at daycare and I met them at church to take possession of both little girls for the night.

We didn't know until about 2 hours later than K had a massive heart attack while she was driving between work and the daycare. Luckily, thank you, Lord Jesus Christ, she was near ETMC at the time and turned in to the parking lot, and was immediately helped by medics on a nearby ambulance, the parking lot attendant and the amazing staff in the ER.

Life started playing in slow motion that night. I had baby S and little K at my house. Somewhere, through the fog, I realized I didn't have any extra diapers. Soooooo....someone offered to go get them for me (no, didn't "offer," per se, told me he was taking care of it for me), left his house, bought the diapers and dropped them off. Is it cliche to say, "He had me at 'diapers?'

K recovered. She IS recovering. It will be a lifelong journey now. At age 42. Two years older than me.

She said that she doesn't remember much about arriving at the hospital. She says she remembers screaming, "I can't die. I have a 6-year-old."

She had 99 percent blockage in an artery. She now has two stents. She regaining strength and vitality day by day, because that's what you do when you're mega-strong like her.

I had to think about things. Things that were happening in my life. Amazingly. Beautifully.

The week before this happened, my silly Sunday school teacher had talked about "trusting."

"We trust God in work, our finances, our children, our homes, our bills and everything but our relationships," she said. "We try to control those but we have to....trust...abide...."

Now because I'm the type to always do what the teacher says, I listened. And gave it up. And that's when the diapers happened. It's all her fault. That's all I'm sayin. 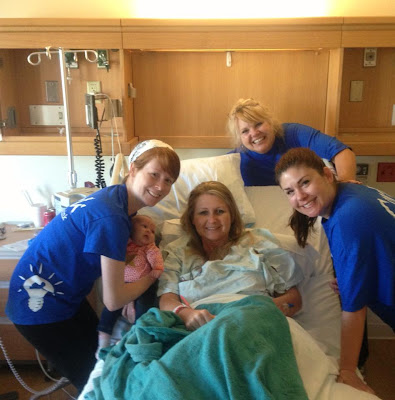 Posted by Amy Brocato Pearson at 8:16 PM No comments: