The Thing About Hurricanes

I couldn't sleep last night, so I was scrolling through old photo albums on Facebook. I came across "Hurricane Ike, September 2008" and realized it's been just over five years since that storm cut its fierce swath from Africa, over Cuba and made a direct hit on the Texas Gulf Coast, where I was living at the time.

Hurricanes are wicked and unpredictable. The only thing you can count on, for sure, is that when they strike, what you fear most will come to fruition.

No matter how well you get ready for the storm, by battening down the proverbial hatches, boarding up your windows, stockpiling water and  non-perishable foods, powering up your generator and finding what you think is a safe spot to ride out the storm,  nothing ever prepares you for the complete and utter devastation and destruction that awaits when the winds have dulled from a roar to a whisper and you peer out into the first light.

Like death and taxes, the only thing guaranteed is that your world will be turned upside down. 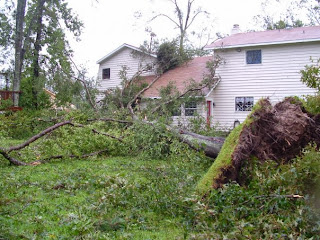 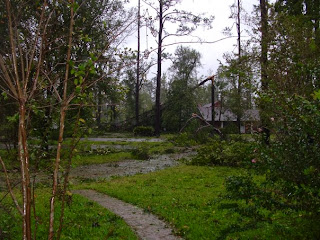 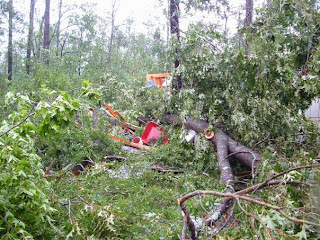 Posted by Amy Brocato Pearson at 8:17 AM No comments:

The "Dog" Ate My Homework

The other night, I threw my son's homework away.

Can you imagine him going to school with that excuse? "I'm sorry, Mrs. H., my mom threw my homework away."

In my quest to keep him organized, I fell quite short myself. I picked up the wrong stack of papers from the table and tossed them into the kitchen trash can, a fact we did not discover until after the remains of the tomato-based soup we had for dinner were scraped out of bowls on top of the aforementioned homework.

In years past, this would have caused a meltdown of epic proportions. But in his newfound middle school maturity, he simply got a dish towel, wiped chunks of tomato and cannelloni beans off of the college-ruled notebook paper, and recopied his work onto pristine paper.

We've worked so hard this year to get him organized. Each folder in the accordion file is color coded to correspond to a class. He carries his agenda with homework assignments written out for each class period. His school supplies are in a box in his backpack and workbooks and school papers are filed into the accordion folder with their folders under individual subjects. At home, there's a designated space to do homework. There's a place to keep backpacks, school uniforms, school shoes and lunch supplies. Today he gets assigned his locker at school so he doesn't have to carry as much around with him.

Now perhaps I need a better filing system. Trashcan notwithstanding.

Posted by Amy Brocato Pearson at 8:02 AM No comments:

As seen in the Jacksonville Daily Progress, Wednesday, Sept. 11, 2013


Editor’s Note: This article was compiled by Cristin Reece of the Palestine Herald-Press in memory of the events of Sept. 11, 2001. 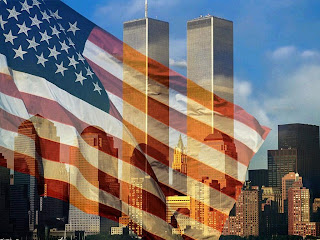 Posted by Amy Brocato Pearson at 8:09 AM No comments:

We've almost come to the end of the third week of the sixth grade and all I can say is, IT'S BEEN AWESOME.

A few of you know how much I stressed out about the sixth grade. Sixth grade owns a third of my gray hairs, along with the Curt-grays and the Constant Deadline-grays. (Luke gets one or two...when he does things like speculate on whether or not he can hit the pool jumping from the second floor balcony of his dad's house.)

Sixth grade started giving me gray hair more than a year ago. I didn't have any kind of peace about where Curt should go to school.

We visited the magnet program at one local middle school. It's a great program, but there were just...seething masses of sixth graders everywhere...it didn't feel right. Curt was only mildly enthused. We visited the campus we're zoned to attend. That DEFINITELY did not feel right. It's not a bad school and I'd trust both of those amazing counselors there with my son's life, but I knew that campus was not the right fit for him. Private schools were out too. In addition to being cost prohibitive (although I'd have made it work if I felt that was the RIGHT place for him), private schools are not required by law to accommodate his special needs. One even told me, flat out, they would not work with him (and I dare most people to even IDENTIFY his 'special need,' let alone refuse to "work with him.")

We visited Cumberland Academy. As soon as we walked it, I knew it was "right." When we left, I had that peace. Not to mention, Curt LOVED it. A charter school with a brand-spanking-new middle school program, we had to apply through a lottery to get in. I'd been assured that it "wouldn't be a problem" for any of the new sixth or seventh graders to get a slot, but I worried anyway. Because that's what I do. And I prayed.

Curt got a slot in the sixth grade class. We went to the first parent information meeting. The principal announced that there was an extended school day for extra learning. Curt, who has no verbal filter or voice modulator, cried out, "SCORE," to the amusement of the faculty and staff and the chagrin of his new classmates. THEN she announced there would be DOUBLE math periods each day. Curt's response? "DOUBLE SCORE!" One kid nearby rolled his eyes, but Curt was in HEAVEN. The icing on the cake? The cherry on the sundae? "Each student will receive an iPad for their schoolwork."

"TRIPLE SCORE! THIS SCHOOL ROCKS." I think the entire assembly erupted into laughter.

Then I found out one of his teachers was a calm, cool, collected, kind, PATIENT and warm friend from my Sunday School class.  Yet another was a vivacious, positive, upbeat, sharp, funny,  PATIENT friend of mine, his dad's and his step-mom's. Peace started to settle in.

Ok, so he did have lunch detention the third day of school, but his teacher was right to nip his excessive talking in the bud (I did mention he has little impulse control, right?). And she handled it SO WELL that he didn't even spiral into the dark realms of "I'm so dumb" that he's prone to.

And so far, he's handled it like a champ.

Did I mention God answers prayers? 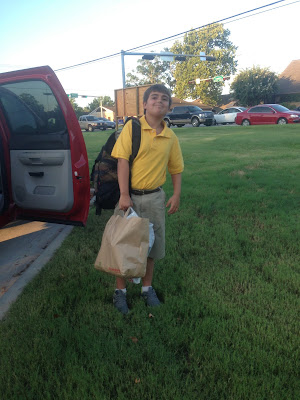 Posted by Amy Brocato Pearson at 9:26 AM No comments:

You turned 10 approximately 2 minutes ago (yes, the time is VERY important in our family) and I can't believe how time has flown over the past decade. I know it's cliche to say that, but I don't know a parent who wouldn't agree the same phenomenon takes place in their lives. How on earth did you reach double digits already?

I remember the weeks leading up to your birth. We knew you were a boy and we knew I would deliver you by scheduled c-section, so our doctor asked whether we wanted to have you before September 1, so you'd start school earlier, or after that date, so you'd get an extra year to mature and develop. We chose to wait and we scheduled your birth for Sept. 4.

Also in those weeks, we found out you were breech, that is, turned head up. With as big as the doctor thought you were and as short-waisted as I am, the doctor thought you'd be stuck in that position for the birth. He scheduled a sonogram for the Monday before you were born (you were born on a Thursday). Sure enough, you had your head firmly planted between my ribs and I'm pretty sure you were stretching by pushing between the bones of my pelvis and my ribs. It hurt!!! The day or two before your scheduled birthday, you turned. Trust me, I felt it. When we went in to deliver you, I told the doctor you were not in breech position any longer. "Impossible," he said. "There was no room for him to turn." I insisted you had. Sure enough, when you were delivered, you presented head down. You were a rule-follower from the get-go.

When you were born, I expected a dark-haired baby with an olive complexion, just like your older brother. You surprised me with your blond hair and fair skin, which was scratched from your very, very long fingernails (to this day we have to cut your nails at least once every three to four days). My friend Allison trimmed your nails for me the first night of your life. You had/have! the most marvelous freckles.

You never slept. You never stopped eating. I could never put you down. And how we cuddled and bonded and loved those first months. It was almost like I never gave birth, we were still so attached to each other.

I'm embarrassing you, I know, so I'll wrap this up.

In 10 years, I've watched you turn into a strong, smart, kind boy. I thank God for you daily. You are a natural leader and can organize and motivate a group of people like I've seen in very few people your age. You have such a big heart, organizing the fundraiser for the people in Japan after the tsunami and always, always befriending the kid standing alone on the playground. Your imagination is magnificent and I love how you can turn any object into a toy. I can watch the wheels of your mind turning when you're playing with a stick, a paperclip and a Matchbox car quietly on the kitchen table. I'm proud of how hard you play soccer and how good you've gotten, Luke. You have such natural ability but, more importantly, you've developed amazing sportsmanship. It makes me proud to see you're always the first to offer help, or take a knee, when one of your teammates gets hurt during play. You've got it interesting, Luke, having a brother with special needs. I know you don't see him that way, you just see Curt, and I know God blessed me with a son whose heart and mind is bigger than any diagnosis. I love you, sweet boy, and may the next several decades be as blessed as the first. 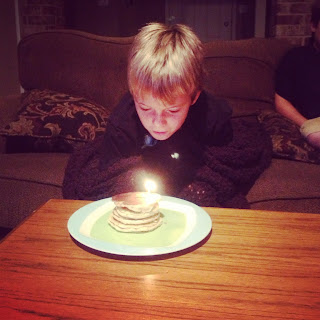 Posted by Amy Brocato Pearson at 8:21 AM 2 comments: