I thought long and hard last night (when I wasn't sleeping) about whether I was going to write about this today. But then I decided that yes, in honor of April being national Autism Awareness Month, I was practically obligated to share today.

You see, something big, REALLY BIG, happened last night. And I had a big, REALLY BIG (albeit all to myself and completely quiet) freak-out afterward.

For the past seven years, ever since Dr. Graytooth made his grave proclamation that  my beautiful, sparkling two-year old was indeed autistic, I've wondered how, and when, we go about sharing this label with Curt.
Would he care? How would he react? Would he understand?

Recently, a third party told Brian and I that we'd have to tell Curt about his autism sometime between now and adulthood. Gee, really? Do you think? Thanks for the unhelpful tip there!

We didn't really talk much about it. There wasn't going to be a set moment when we sat him down and said, "Son, you're autistic." There wasn't a plan to wait for a certain age or certain time or anything. No plan.

But last night, we did.

We used the A word.

Curt knows that he thinks differently than other kids. Even he is not oblivious to the fact that his brain isn't wired like those of other children. But we had never, until last night, used the A word.

I'm not even certain what triggered the conversation. We were sitting at the kitchen table, winding down after a horrible work day, and I think the boys came running in deep in the throes of an argument about Curt not playing Luke's game "correctly." Luke, at age 7, is pretty savvy when it comes to all things social. He's always surrounded by friends, is quite a little leader [insert shameless mom brag  here] and has a WICKED imagination. So when he plays games of pretend, of superheroes and pirates and space aliens and flying tigers, Curt, with his very literal mind, doesn't always understand. And this upsets Luke.

So last night, as I was explaining to Luke that Curt didn't, COULDN'T, comprehend the plot Luke was fashioning for the two of them, it seemed to be the right time to share the A word with both boys.

It was a simple, straightforward conversation. It went something like this:

"Curt, do you know how your brain works differently from some other people's?

"The way your brain works is because of something called autism."

"You know how you can hear trains from really far away, and how you can do long division in your head and the other kids can't yet, and you know how you love lights and spinning things? That's all because of something called autism."

And that was that.

It was MUCH BIGGER for me than it was for him.

And for that, I am thankful. 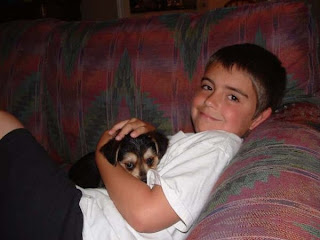 Posted by Amy Brocato Pearson at 8:09 AM