Do I really need to say MORE?

Let's get this straight right up front.

Because you see, JAMES, has an autism spectrum disorder, hereby referred to as an ASD.

And we all know I have a soft, gooey, caramely, hot fudgey spot in my heart for people with ASD's.

Not everyone with autism is high functioning. Some 60 percent of people with autism are mentally retarded, that is, have an IQ less than 70.

And not everyone with autism is Rain Man.

Rain Man is what we call a savant. He had amazing skills in some areas, but was significantly deficient in others. VERY RARE. A savant is someone with rare skills, but only constitutes 10 percent of the autistic population.

Maybe James is a savant, with an incredible talent in music.

But I don't think so.

I was all ready to vote for him. And only him. Because he was someone with autism. And I have to champion people with autism. But he was so much more than that.

James, as it turns out, in my mind, is an American Idol, without compensating for his so-called disability (that's a whole other post) at all.

Sorry, Robin, Casey is creepy. Scotty is creepy. The other dude, whose name I can't even remember, is not talented. Lauren isn't an American Idol.

If I had to bet on my top 2 today,  it would be Haley and James. With  James winning.

But not because he has autism.

But because he has TALENT. 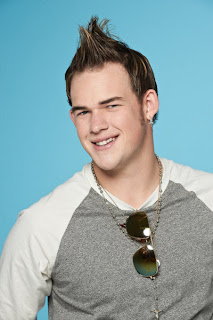