That's really all I have to say about that, but it wouldn't do my afternoon justice.

Last week I had the privilege of being invited to the Texas Chefs Association East Texas Chapter's spring meeting, their Mini Food Show.

Did I say that already?

Director and Chef Jackson York, of Edom Bakery is always so welcoming and invites us to most meetings. I was finally able to make one and what a good one to be able to make!

Held at the clubhouse in The Cascades, the vendors at the Mini Food show filled a banquet room with tantalizing aromas, sumptuous smells and delectable tastes.

There was a vast, dizzying array of fresh fruits and vegetables. You could taste, touch and smell black garlic, fingerling potatoes, star fruit, dried ancho chilies, sugar snap peas, ugli fruit and almost anything else you could imagine dazzling you on your plate at an East Texas restaurant. 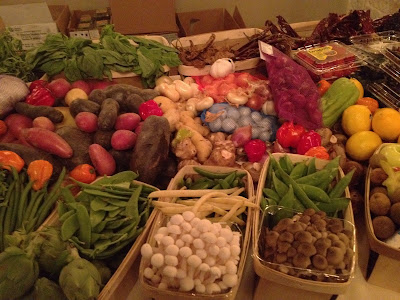 There was a carving board of roasted fresh strips of lamb with mint jelly and roasted fresh leg of pork with a tangy chutney. I went back so many times I think they were going to have to ask me to leave... 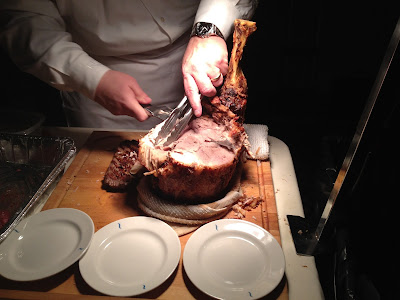 Representatives from Texas Quail Farms were on hand with exquisitely crafted purses of quail - some grilled, some fried. I'll tell you what - it does NOT taste like chicken. It was so much better. I don't think I'd ever eaten such a rich, succulent presentation of quail before. I went back so many times I think they were going to ask me to leave...
Tyson Foods was there with their smoked meats. Oh. That. Brisket. 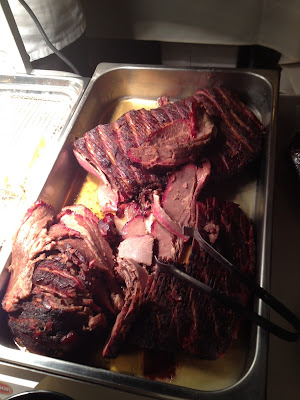 I *could* have gone back to that booth so many times they'd have to ask me to leave, but I was getting full. Very full.
And there was still the Lactalis Foodservice booth to visit. With fresh guacamole, guamole mixed with pico de gallo, fresh halved avocados, roasted sweet potato puffs and fried, roasted mixed potatoes...and cheese. Oh the cheese. The artisan cheese plate included samples of Italian Galbani Bel Paese, a smooth, creamy cheese with a buttery flavor. There was French Boule d'or Mimolette, a dark orange cheese with nutty tones. Then there was Istara P'tit Basque, a hard cheese fashioned from sheep's milk that was both tart and nutty, with a dense crust. The final tasty morsel was President Emmental, the original Swiss cheese that practically melts on your tongue. 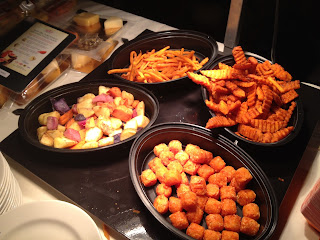 I rue the fact that I did not write down the name of the vendor at one of my favorite stations. Alas, my hands were too full of shrimp wrapped in crispy cellophane noodles. 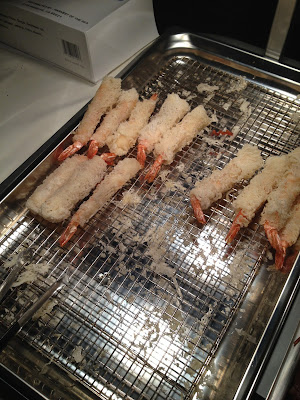 And then at the next booth was the most sublime crab and avocado mix, resplendent with fresh lemon and served on crackers. 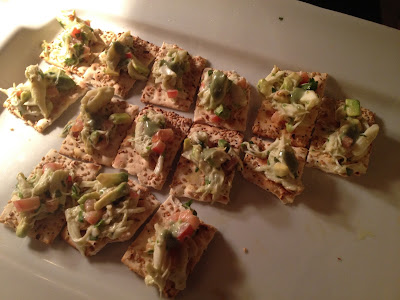 At most of these booths, I was in grave danger of being escorted out immediately.

There was smoked turkey breast and honey ham, brined in all natural ingredients. And then, there was Blue Bell, strategically positioned near the exit door so visitors could be rolled to the elevator, with a freezer full of tasty treats. I managed to limit myself to one spoonful of cinnamon ice cream.

There were chefs, real chefs (as opposed to tasters like me) roaming around, tasting the offerings and making orders for their establishments. I ran into Cedric Fletcher, owner/chef of Fat Catz and the soon-to-open Italian restaurant, Zaza. I saw buddy Edwin Santos. But mostly, I just ate. I'm surprised they didn't ask me to leave...
Posted by Amy Brocato Pearson at 10:44 AM

Email ThisBlogThis!Share to TwitterShare to FacebookShare to Pinterest
Labels: cooking, IN Magazine