This was the best pizza ever.
No, that claim wasn't too much of a stretch.
I've eaten a lot of pizza and have made a lot of dishes inspired by pizza.
But this one takes the cake. Or in this case, the (pizza) pie. I laid in bed last night trying to wax poetic about the nirvana that was this pizza, but came up short of the perfect words to describe this heavenly creation.
Earlier in the week, I'd seen a recipe posted...oh my gosh, I can't even remember where...(either on Facebook or Pinterest, no doubt) for a deep dish, Chicago-style pizza...baked in a cast iron skillet. (Wait, found it!)
Was there any doubt this girl would be trying that recipe, as soon as humanly possible?
Now two things are critical about pizza, in my humble opinion: the sauce and the crust.
Really great pizza starts with a really great crust. I will admit I was a bit leery of this Chicago style pizza; in my experience with imitations (because this recipe is now the gold standard), the crust is soggy and limp. You need to eat it with a fork (or in some cases, a small shovel).
But this crust...oh this crust...held up to four layers of cheese and pepperoni. *IF* I was going to do anything different (because this was, after all, the first time I made this and I am incapable of leaving a recipe alone without tweaking it), I would have brushed the edges of the crust with extra virgin olive oil before baking. I was also a bit skeptical of the corn meal. I've used it ON a pizza stone, to keep the crust from sticking, but never incorporated it in the dough. Delicious. Furthermore, it was my first time to assemble the dough in my food processor. Super simple and quick. (But alas, I still managed to splatter flour everywhere).
Chicago Style Deep Dish Pizza in the Cast Iron Skillet
Crust:

Assemble the above as you would any yeast dough, and let it rise once.
An alternate method is to use the food processor:

Into a standard sized food processor, place all of the dry ingredients, including the yeast.

Pulse the dry ingredients to combine and then pour the combined wet ingredients through the feed tube in a stream.

When the dough forms a ball, let the dough process for 2 minutes.  After 2 minutes, enough heat is generated to activate the yeast.

Put the dough into a non-reactive container, cover and let rise.
Into an oiled 10 1/2 inch cast iron skillet, pat or roll the dough out dough to cover the bottom, and about 1 and 1/2 inches up the sides. If the sides of the dough don’t want stay up, and they tend to shrink back down, don’t worry.  As the topping ingredients fill the pizza during assembly, it is easy to push the sides back up, by pressing down into the “corners” of the skillet.  The filled pizza will keep the sides in tact. 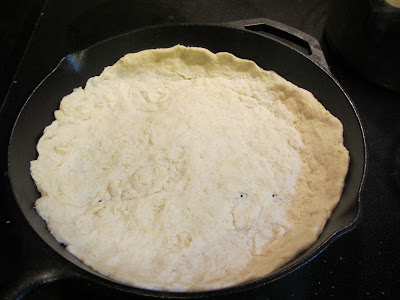 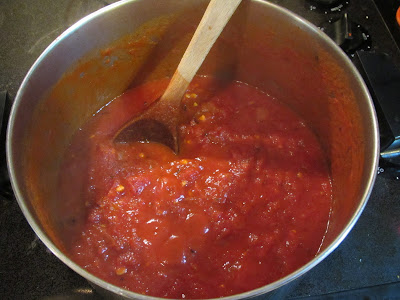 Since this was going on pizza, after it simmered all day, I pureed it in the food processor just to give it a velvety texture. 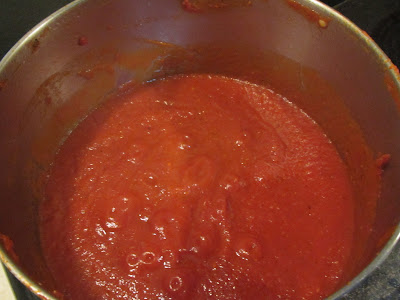 Then it was time to start building the pizza.
We decided on a traditional combination of cheese and pepperoni. (I have a very strict no-fruit, no-fish rule for my pizza). But you use whatever makes your heart go pitter patter.

First, a layer of sauce over the crust: 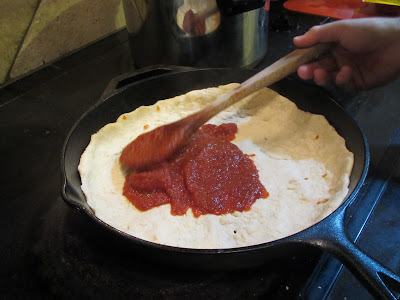 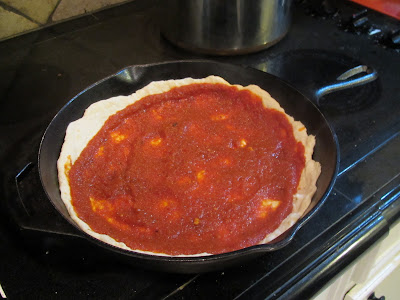 Next a layer of a blend of five Italian cheeses: Parmesan, Asiago, Mozzarella, Provolone and Romano. 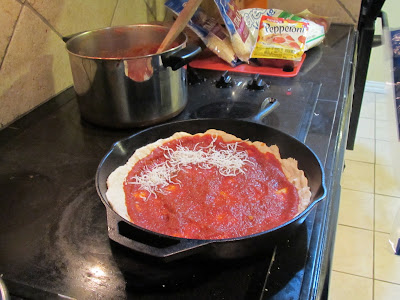 Followed by a layer of pepperoni. And not turkey pepperoni. The real stuff. The I-Have-To-Visit-The-Cardiologist-On-Monday-After-All-This-Meat-And-Cheese kind of toppings. 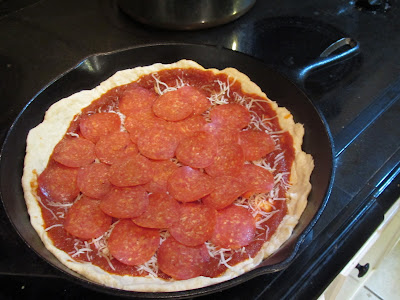 Then more cheese. And more pepperoni. Four layers worth. 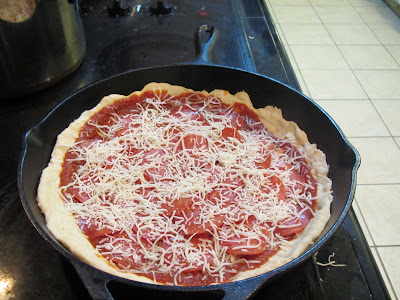 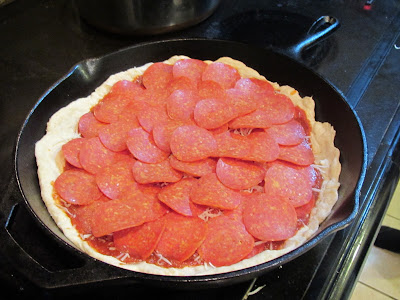 Finished with a layer of plain mozzarella. 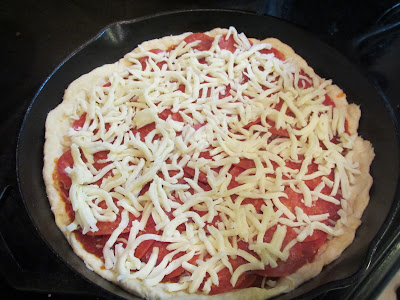 (Brush crust with extra virgin olive oil).
The miracle comes in how you bake this pizza, I think.
When you have the pizza topped to your heart's content, place the cast iron skillet in a COLD oven. Preheat to 475 degrees. When the oven reaches that temperature, turn it down to 375 and bake for 30 minutes.
The originator of this recipe has different methods for gas and convection ovens, so if that applies to you, read here.
If not...just TRY to let this sit for 5 minutes before slicing into delectable, savory, gooey, crispy, deliciousness. 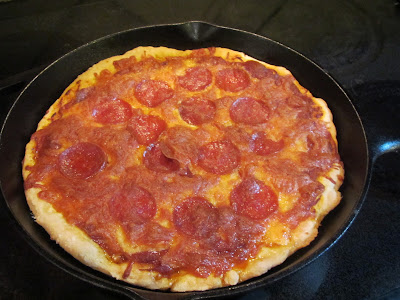