Today my son was REadmitted to the Special Education department in Tyler Independent School District.

I'm guessing not too many parents would be "thrilled" their child was in Special Ed. But you see, he lost in eligibility for Special Ed back in 2010, when the testing under what is called the "autism bundle" showed that he no longer met ACADEMIC criteria to fall under the umbrella of Special Ed. It never takes away his diagnosis of autism, but for educational purposes, he no longer qualified for Special Ed and the services it offered.

That was a good thing.

After all, we WANT Curt to be at a level that he doesn't need support services from his school.

And there's NO DENYING Curt is an exceptionally smart kid (if I do say so myself).

But last year, he struggled with reading comprehension and the TAKS test. His awesome teacher and the awesome autism team leader suggested that the district re-evaluate my Bugface so that whatever he struggled with, we caught early and corrected. Since I'm all about early intervention (it got us where we are today, hands down!) we jumped right on that.

The autism team/diagnostician/speech therapist/occupational therapist completed observation and testing so we met today in an ARD committee - a fun little group that convenes every time there is a change in Curt's (and child with special needs' ) educational status. ARD stands for "Admission, Review, Dismissal," which is what the committee is charged with every time it meets. Today we were there for the "A" - admission.

The results of all the observation and testing showed that Curt was, indeed, eligible for Special Ed again. Now keep in mind that even when not under the auspices of Special Ed, Curt still had considerations under 504. And really, when it comes down to it, 504 covered most of his needs. But now he will get official occupational therapy support (I say "official" because any school district worth their salt will help accommodate a child with special needs despite a federal mandate) to help meet  his considerable sensory integration needs. In addition, a reading resource teacher will come to his classroom twice a week to help him with the reading comprehension in his daily lessons.

I'm also thrilled his teachers and the staff at Rice Elementary want to give him the MOST support they can. With a few minor exceptions, we have been truly blessed at the educators who have been in Curt's life since he started school at age 3...Mrs. Smith, Mrs. Kelly, Mrs. Donna, Mrs. Sharon, Mrs. Roork, Mrs. Cooley, Mrs. Pope, Mrs. Hughes and Mrs. Marten. Plus Mrs. Rinewalt, Mrs. Deshotel, Mrs. Katie (Oh I know I'm going to forget someone and that would be horrible).

So gimme an A for "admission!" 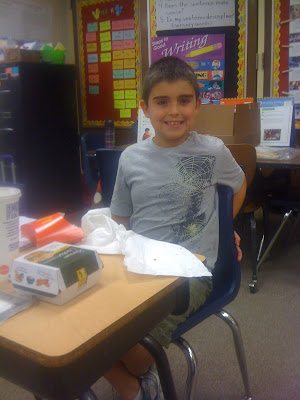 I praise you because I am fearfully and wonderfully made;
your works are wonderful,    I know that full well.
Posted by Amy Brocato Pearson at 12:04 PM