I hadn't heard of it until we moved to Tyler (the Last Great Place).

But then he wanted to play soccer. So I signed him up, in a DIFFERENT league, the spring semester of his  first grade year. Because that's when most kids start sports, right?

His team had probably been playing since they were in utero. Or at least since they could walk. And that was great.

He and his coach did not speak the same primary language. Or even close. Nor did he and his teammates.

During the first game, the coach put Curt in at forward. Within 30 seconds, he'd curled into fetal position on the field and had to be carried off.

The season progressed. Curt rose to the occasion as far as his abilities allowed. He RARELY played during games. Maybe 5 minutes a game. And THAT was NOT acceptable. I'm really glad the other kids on his team were accomplished athletes at age 7. But I'd expected that Curt would be nurtured and taught.

He played with that team again the next semester. Fall soccer of his second grade year. His team was a winning team, which resulted in less and less playing time for the so-called "weak link" on the team (yes, someone translated the Spanish for me!) The final straw came in one of the last games of the season. For the first time, his team was losing. And not just LOSING, but being decimated. I believe the score was 12-1. Curt hadn't played yet. Resting on their laurels, the rest of the team had played poorly. And STILL the coach didn't put Curt into the game. We'd had it.

Curt played the last two minutes of the game. The team lost. But I knew he'd NEVER go back to that team.

Let me just say, in interest of journalist fairness, Luke plays for the same league and has for the past several years. With the same coach, with the same kids. And it's been a wonderful experience.

Had Curt not been assigned to that team, things may have been different.

But second semester of his second grade year, Curt switched to UPWARD soccer.

And his sport's experience has been so different.

After each practice and during each game, there is prayer and a Bible verse to learn and memorize. Each team member plays an equal amount of time per game. We learn to cheer for the other teams' successes. And they defer to ours. Coaches teach skills, celebrate fun and guarantee each child have a good experience while being active, learning how to be a team member and being themselves.

And most of all, he's learning what third graders REALLY need to get out of organized sports: activity, fun and sportsmanship. 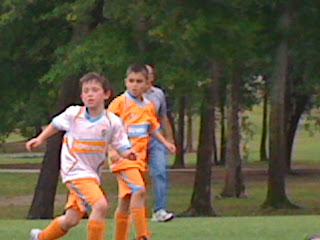 Posted by Amy Brocato Pearson at 11:33 AM