There's a Gun in Luke's Hand

But children on the autism spectrum take things VERY literally.

When someone tells Curt he's growing like a weed, he's quick to point out that he now wears a size 4 shoe, up from a 2 1/2 last year, and that "growing like a weed" is a simile and is not literally what the person making the observation meant. If you tell Curt to 'hit the road,' he'll tell you that's an idiom and not really what you meant to say. He likes things black and white, with no 50 shades of grey in between.

So when Curt came into the house the  other evening, after he and Luke had been playing outside with the boys next door and said, very matter-of-factly, "There's a gun in Luke's hand," I took him at his word. I flew out of my chair and made a beeline for the garage. When I flung open the garage door, it didn't help my already panicked state that I could hear Luke screaming hysterically, I tore around the cars blocking my view and found Luke in the yard next door, with a gun in his hand.

An orange and yellow plastic gun. 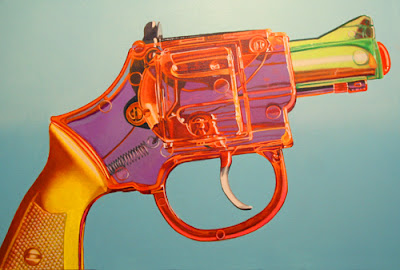 The trigger had pinched the skin of his palm and was, quite literally, caught in his hand.

After a quick extraction (and a super duper loud screech), the gun was no longer IN LUKE'S HAND.

And then we had to hit the road for some gauze and a bandage.