The Greatest {Elevator} Adventure EVER

Last week I received a LinkedIN invitation from a gentleman who works for ThyssenKrupp here in Tyler.

If that name doesn't mean a lot to you, you wouldn't be alone.

But in my house, ThyssenKrupp is as familiar as GE or Sears or Lego. Or even more so.

And Curt and Luke LOVE elevators.

Curt has even created a company, Donakina, (don't ask, I don't know what it means) for his elevator photography. Oh, did I mention he makes videos of elevators too? We have elevator videos from Tyler, Galveston, San Antonio, Houston and Dallas.

But back to the story. I received this LinkedIN invite and I didn't necessarily recognize the name, so I read the profile. "ThyssenKrupp" jumped out at me immediately.

Then I did something I would never usually do: I emailed Mr. Jeremy Caruthers, branch manager at ThyssenKrupp, to let him know that their biggest fans live right here in Tyler, Texas. He emailed back, inviting us to come tour the office and see how Curt's FAVORITE elevators work.

We went yesterday. I hadn't told the boys we were going (because that's the first rule of adventures). During the drive to the downtown location of ThyssenKrupp, they tried to guess our destination. They didn't even come close. But I did bring the video camera in anticipation of the adventure and Curt took a video starting in the lobby of the building. 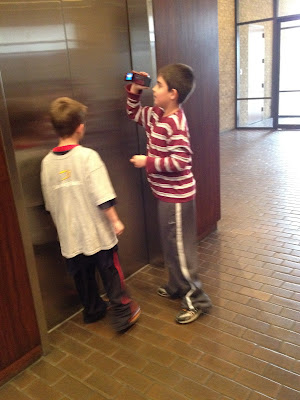 It was a long ride up. Someone had (helpfully) pushed all the buttons in the elevator before we got on, so we stopped at every floor (no it wasn't us, my boys know better than to perform such a vast breech of elevator etiquette). 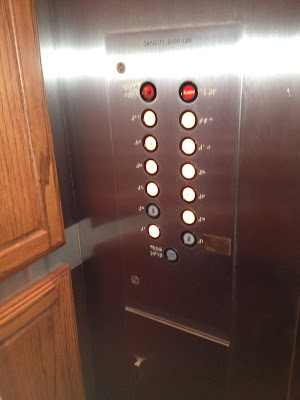 When we got to the 11th floor, they finally realized where we were going. 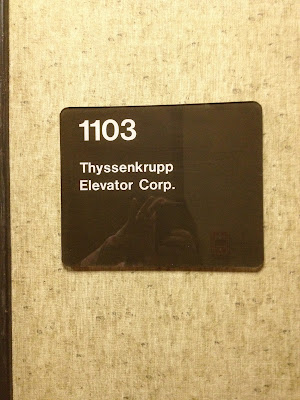 Curt was pretty much in shock. 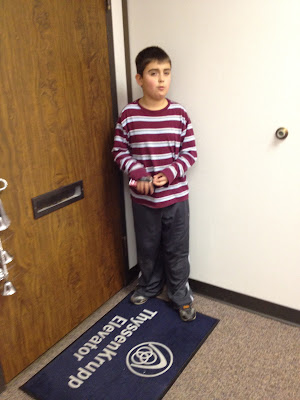 But quickly warmed up when we were greeted by the wonderful staff of ThyssenKrupp. The boys were SO EXCITED. They got lots of goodies, but more importantly, they let Curt push the buttons on the sample fixtures to his heart's content. 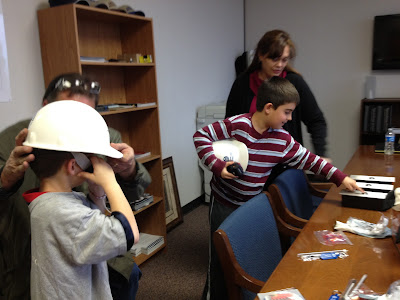 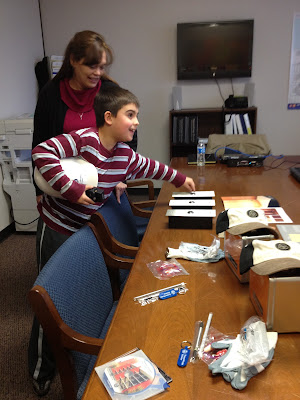 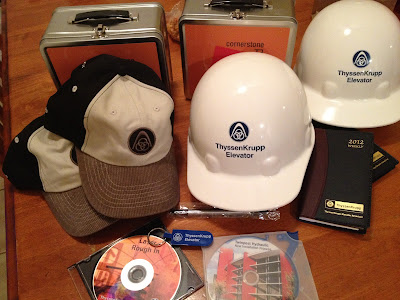 And then...AND THEN (drum roll please)...Mr. Mike Jones, operations manager, took us to see how the elevators worked.

Down on the first floor, he inserted his magic key to stop the elevator from operating. Then he opened the doors into the elevator shaft so we could see how it worked from the ground level. 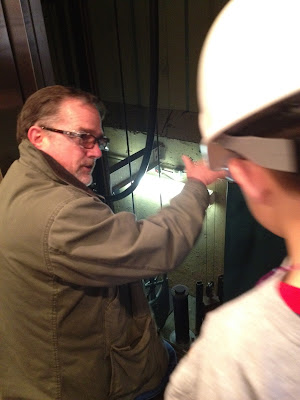 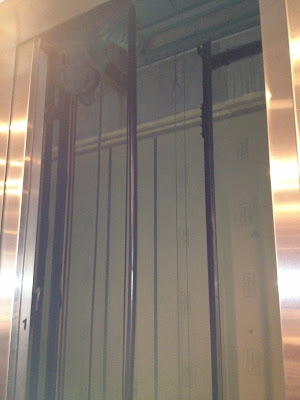 Curt and Luke were in heaven.

After we carefully examined the inner workings of the elevator from the first floor, we rode to the 12th floor, the highest floor in the building, and checked it out from that vantage point. 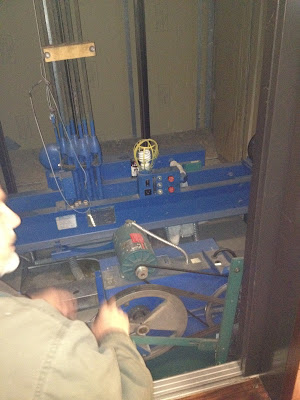 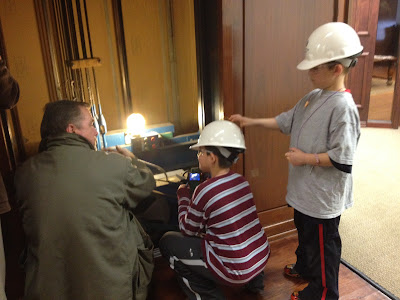 Then it was off to the roof and the mechanical room. (I'm not even going to try to explain everything we learned, although you can probably watch Curt's video when he posts it on YouTube.) 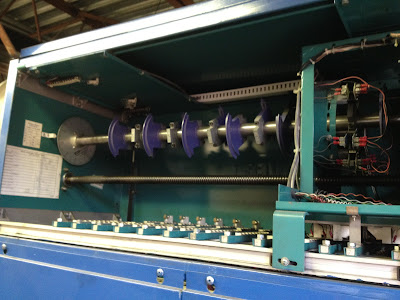 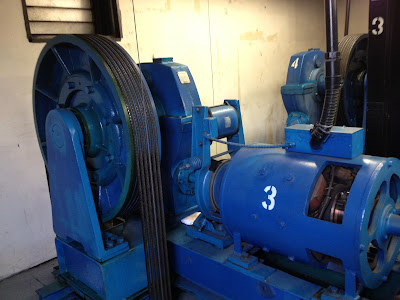 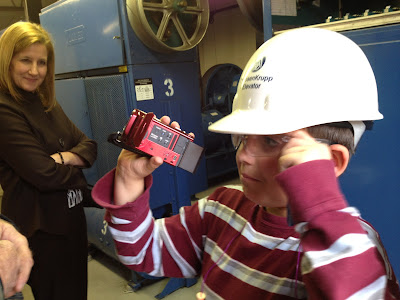 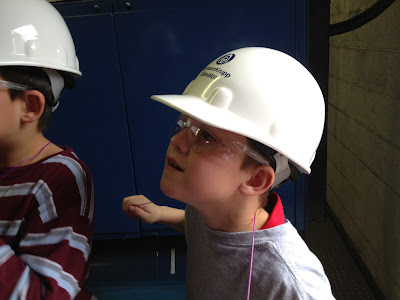 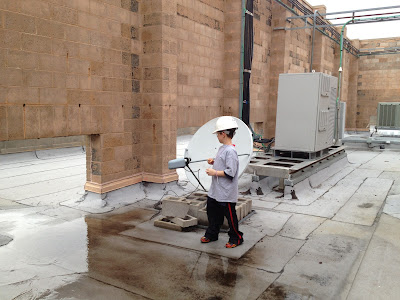 Next it was back down to ground level where they actually removed a hydraulic elevator (old school...but Curt talked the entire rest of the evening about what a pity it was to get rid of that piece of history) and a dumbwaiter to make way for new construction. 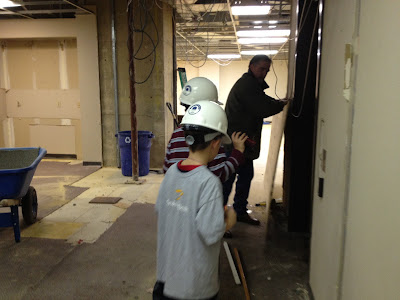 And checked out the lobby panel (after all, lights were Curt's first love). 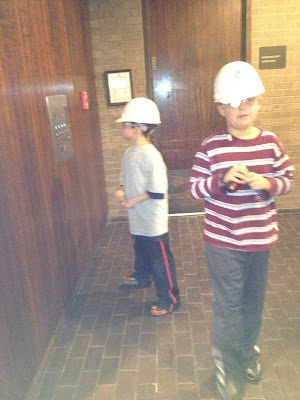 And we ended the day back in the offices, where Mr. Caruthers showed Curt a website where he can design his own elevator cabs and let him press the buttons on the sample fixtures, again. There was a tense moment when Curt tried to convince me to BUY the sample fixtures, but luckily it passed quickly when he learned that those are only sold to companies as PART of their elevator.

Curt and Luke wore their hardhats around all night last night. Curt spent the hour Luke was at basketball practice designing elevator cabs. They didn't stop talking about their field trip (and those who know us know I mean this literally) all evening.


THANK YOU, ThyssenKrupp Tyler!!!! This was a day they'll *NEVER* forget!
Posted by Amy Brocato Pearson at 9:49 AM