The News Business Is Like A Box of Chocolates...

...You never know what you're going to get.

There is no "average" day in the news business. I was telling someone yesterday that my morning was going well so far, but you never know what kind of turn it could take thoughout the day. It was raining, so the probability of traffic accidents was high. It was a Monday, so there might have been murders over the weekend that we hadn't heard about until the cops reporter made his rounds. We did hear about a tragic suicide, but we don't report on those.

No, yesterday's news took the kind of serendipitous turn that makes building a front page fun in a man-loses-dog kind of way.

At first blush, a man losing a dog doesn't sound like a happy-happy-joy-joy kind of story. But this one was.

A man came in off the street. Literally. He lives in a horse trailer behind a floral shop down the street from the paper. He had his back pack and his winter hat and a special service dog vest. That no dog was wearing. His service dog, Fluffy, had been missing since Saturday. Mr. Booth, a homeless veteran, was beside himself. His "baby," as he called her, helped him with physical and mental issues he didn't like to talk about. In his extensive lamentations, all he wanted was his dog back.

Fuzzy, a black-mouth cur, has been missing since early Saturday afternoon, said her owner, Charlie Booth.

The 1-year-old, golden-colored dog stands about a foot-and-a-half high and has a black spot on her tongue, Booth said.

Booth, who lives behind Cindy's Floral, has had Fuzzy for about nine months. He trained her himself and she's certified as a service animal through Gold Star German Shepherds: All Breed Dog Training & Service Dogs, a company out of Nevada. According to the Americans With Disabilities Act, service dogs are not required to have a federal certification, although state requirements vary from place to place. In Texas, assistance animals must be trained by "organizations generally recognized as reputable and competent by agencies involved in rehabilitation of people with disabilities." Booth has all papers regarding Fuzzy's certification and had just received her vest, designating her as an assistance dog, in the mail on Monday.

"She's my baby, I just want her back," Booth said. "People know me and Fuzzy are together. We go together."

Booth, who suffers from what he describes as partial paralyzation and equilibrium problems, among other things, said Fuzzy helps him get up and down and helps him maintain his balance. On his "lazy days," when standing is too difficult, "she lays in the driveway by me and watches the world go by," he said.

"She helps me mentally and emotionally and physically," he said. She helps him so much, in fact, that the first thing Booth does when he receives his disability check is buy Fuzzy a steak.

Booth has visited the police and the animal shelter in Jacksonville looking for Fuzzy, but doesn't have the financial resources or transportation to launch a larger-scale effort to find his beloved dog.

Booth, who doesn't like to talk about his service in the military, has also sought aid from the local Marine Corps League Det. 1381, confirmed Commandant Chuck Bones.

If you find Fuzzy, please return her to Booth in the area behind Cindy's Floral on East Rusk Street or call the Jacksonville Daily Progress at 903-586-2236.


Fast forward to this morning: calls came in with alleged Fuzzy sightings. At lunch time, I went out to investigate. In the rain and fog we drove around Jacksonville, slowly driving down the streets where Fuzzy was supposedly seen.

We finally stopped by the animal shelter.

"Oh, Mr. Charlie? He's got his dog back," the official there was happy to tell us.

I decided to pay Mr. Booth a visit. Sadly, he wasn't there. I came back to the office, beating the heaviest rain storm of the day by a mere matter of minutes.

Moments later, I was paged over the interoffice intercom to come to the front lobby.

I went up front and there was Mr. Booth. AND FUZZY.

Amy Brocato Pearson
Jacksonville Daily Progress
JACKSONVILLE — It takes a village to raise a child and it takes a small city to find a lost dog.

But that's exactly what Jacksonville did.

"You're goofy, you're just a goofy girl," obviously jubilant Booth said, when he visited the offices of the Jacksonville Daily Progress to share the good news.

Meanwhile, Fuzzy, who definitely lives up to her name with a thick, luxurious golden coat, laid at her master's feet and obeyed his every command.

The Daily Progress received numerous phone calls Tuesday morning with Fuzzy sightings, but it was one resident, a man only identified as living on Brown Street, who apparently found Fuzzy and brought her to the Klein Animal Shelter.

"Then Mr. Roy and Ms. Jennifer went and got her and brought her back," Booth said.

'Roy' and 'Jennifer' (Booth insisted on first-names only) are the owner and employee of CJ's Quick Stop on East Rusk Street.

"They were helping me," Booth said.

Booth wants to thank the Marine Corps League Det. 1381, the Jacksonville Police Department, the Klein Animal Shelter, 'Ms. Micky' at the Clothes Closet, Jacksonville Animal Control officers, the USPS mail carrier in the area of Cindy's Florals on East Rusk Street, 'Mr. Roy,' 'Ms. Jennifer and her husband, Scott, and everyone else who assisted in the search, which includes an 86-year-old reader of our newspaper who was unable to physically help search, but offered financial assistance for flyers to help find Fuzzy.

Fuzzy, who was missing the collar and tags she was wearing when she disappeared, will turn 1 year old on Jan. 22. 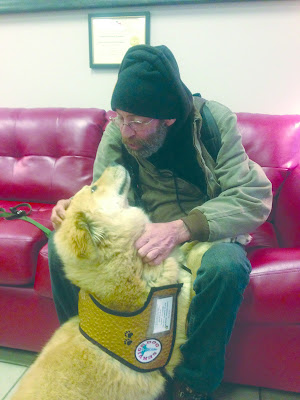 Did I mention I love my job?
Posted by Amy Brocato Pearson at 3:41 PM