I read about Halloumi...somewhere...probably Bon Appetit. It doesn't matter where, but when I read about a cheese that you could slice into slabs and place directly on the grill, I was sold.

I found Halloumi at my Happy Place, aka, Fresh, this weekend. Originally from Cyprus, Halloumi is a mixture of goat and sheep's milk and is set with rennet. It is unusual in that no acid or acid-producing bacterium is used in its preparation.

Because of its HIGH melting point, it lends itself to preparations such as slappin' it on the grill and goin' to town. I also read that it's very conducive to being fried. The high melting point comes from the fresh curd being heated before being shaped and placed in brine

I quickly dubbed Halloumi the "squeaky cheese." Much drier than most cheeses I've tasted, and with a nutty bite to it, Halloumi almost does "squeak" against your teeth as you eat it.

I read about several different ways to prepare it, but I wanted something simple. I settled on brushing the cheese with lemon-infused olive oil and sprinkling a smattering of sea salt and freshly ground black pepper over it. I planned to sprinkle it with spicy oregano from my herb garden after it came off the grill. 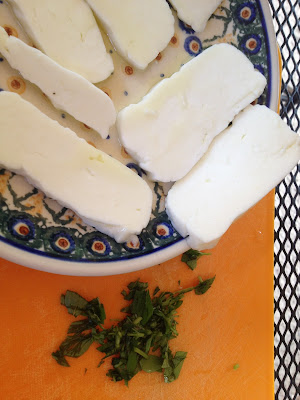 Most recipes I read said to grill the cheese over medium heat for two minutes on each side. 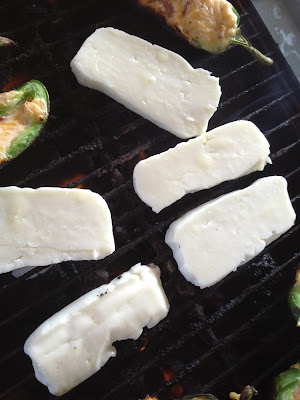 There they are, those beauties (surrounded by a few stuffed jalapenos that were already in the works).

Grilling didn't take long at all, even over medium heat.  The cheese quickly browned and bubbled up. 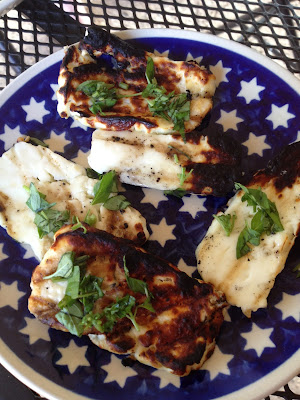 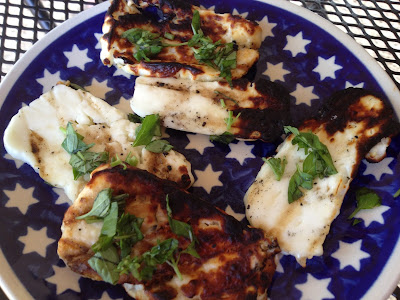 However, I was surprised when I bit into it that the cheese was not at all melty on the inside. I expected it to be at least a little soft and gooey, more like the cheese in a grilled sandwich. It wasn't...not at all...but the grill gave the cheese a smoky flavor and crisp crust. The spicy oregano was just the right touch.

I did accidentally drop a piece of the cheese through the grill grate and onto the coals/into the flames when I was flipping the cheese.

And burned, rendering a warm orange flame long after the gas grill had been turned off. 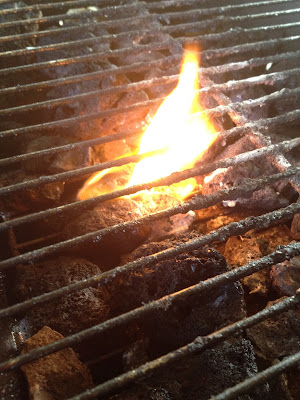 High melting point? That was an understatement!

Posted by Amy Brocato Pearson at 9:12 AM