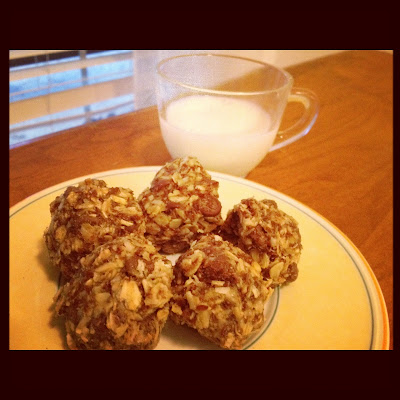 This is a tale of two little boys....and a recipe that was originally named "Energy Bites."

But when you take two little boys, and try to offer them "Energy Bites," they want to know what's IN an 'Energy Bite.'

"Oh they're super healthy and super delicious," I said, exaggerating ever-so-slightly on the "healthy" part.

The giggles begin as the two little boys skeptically examine the Energy Bites, turning the morsels over in their palms and picking at the flakes of coconut.

Whatever you call them and for whatever reason, two little boys are lovin' Super Balls.


Stir all ingredients together in a medium bowl until thoroughly mixed.  Let chill in the refrigerator for half an hour.  Once chilled, roll into balls of whatever size you would like.  (Mine were about 1″ in diameter.)  Store in an airtight container and keep refrigerated for up to 1 week.
Makes about 20-25 balls.

Substitutions abound for just about any of these ingredients.  Feel free to substitute in your favorite nut butter (almond butter, sunflower seed butter, etc.) for the peanut butter.

Some other fun substitutions for the chocolate chips (or an addition to them) could include:

Posted by Amy Brocato Pearson at 8:44 AM