I haven't blogged in forever. And I'm OK with that. I write all day for a living and I often write when I come home at night, too. So I'm really not bothered by neglecting my blog for a long time. A really long time.

However, tonight I made something for dinner that was well received on Facebook, so instead of private messaging everyone who asked for the recipe, I figured I'd just blog it.

It all started because I try to include the boys in meal planning. But this usually results in requests for tacos 17 nights a week. While I really like tacos and tried to introduce Curt and Luke to the wonders of fish tacos in fresh flour tortillas with a cabbage slaw, or spicy pulled pork tacos in a soft corn tortilla, they weren't buying it. They want ground beef, with orange seasoning, in a crunchy corn shell that stands up by itself. At least I finally convinced them that homemade taco seasoning was better than that orange stuff in the packet.

But I digress. Hey, I'm tired.  So we're planning meals for this week and they ask for breakfast for dinner. I wholeheartedly endorse this plan as I could eat breakfast for every meal forever. Curt wanted biscuits and gravy. Luke wanted scrambled eggs and bacon. I *could have made it all, I suppose (I feel like the breakfast short-order cook often enough on weekends), but like I said, I'm tired when I get home from work.

AND I'd just seen a recipe on Pinterest I wanted to try.

Biscuits and Gravy Casserole sounded equal parts intriguing and abhorrent. I'm not a fan of white gravy, even though Curt loves it. However, this recipe incorporated pretty much everything the boys had asked for. So we tried it.

It's first recommendation was that it smelled so good baking. That's a huge recommendation as cooking is such a sensual experience. Not 9 1/2 Weeks sensual...well...I take that back, EXACTLY 9 1/2 Weeks sensual (and if you don't know what I'm talking about, Google it and I almost promise you the first scene you'll find on YouTube is the scene I'm referencing). My point, is, cooking, eating and food should engage ALL the senses, all the time. Whether in a family friendly manner or not.

So it smelled great cooking. It bubbled up beautifully and had a lustrous golden sheen to the top when I took it out of the oven.

I'm lucky it lasted long enough to take a few quick pictures with my phone; the boys devoured it.

It's not healthy. It contains processed foods. If you're one of those do-as-I-say-not-how-I-really-eat people, take a hike right now. What I tried to emphasize tonight to the boys was to take a smaller portion of the casserole and a HUGE portion of salad. They ate both their casserole AND their ginormous salads, then asked for more casserole. I gave in. 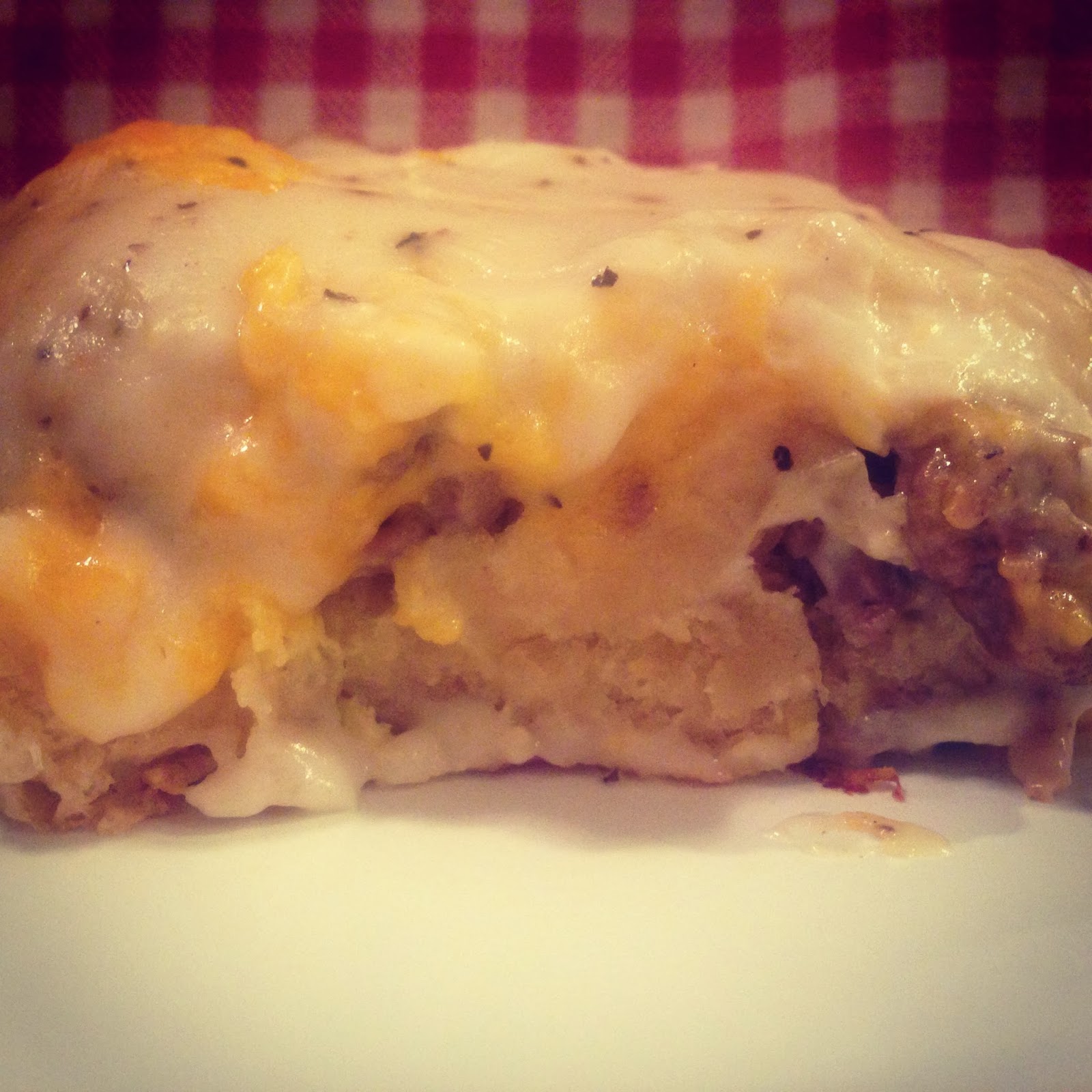 
Preheat oven to 350 F. Take a 9×13 pan and spray it with non-stick spray.
Then take the biscuits and cut them into 1″ pieces and line bottom of pan with them.
Brown sausage in a skillet over medium heat. When it’s done drain the grease and scatter sausage over biscuits.
Sprinkle with cheese.
In a medium sized bowl whisk eggs and milk with a pinch of salt and pepper and pour it over the pan.
Make gravy mix per package directions and pour over the top.
Bake in the oven for about 30-45 minutes. 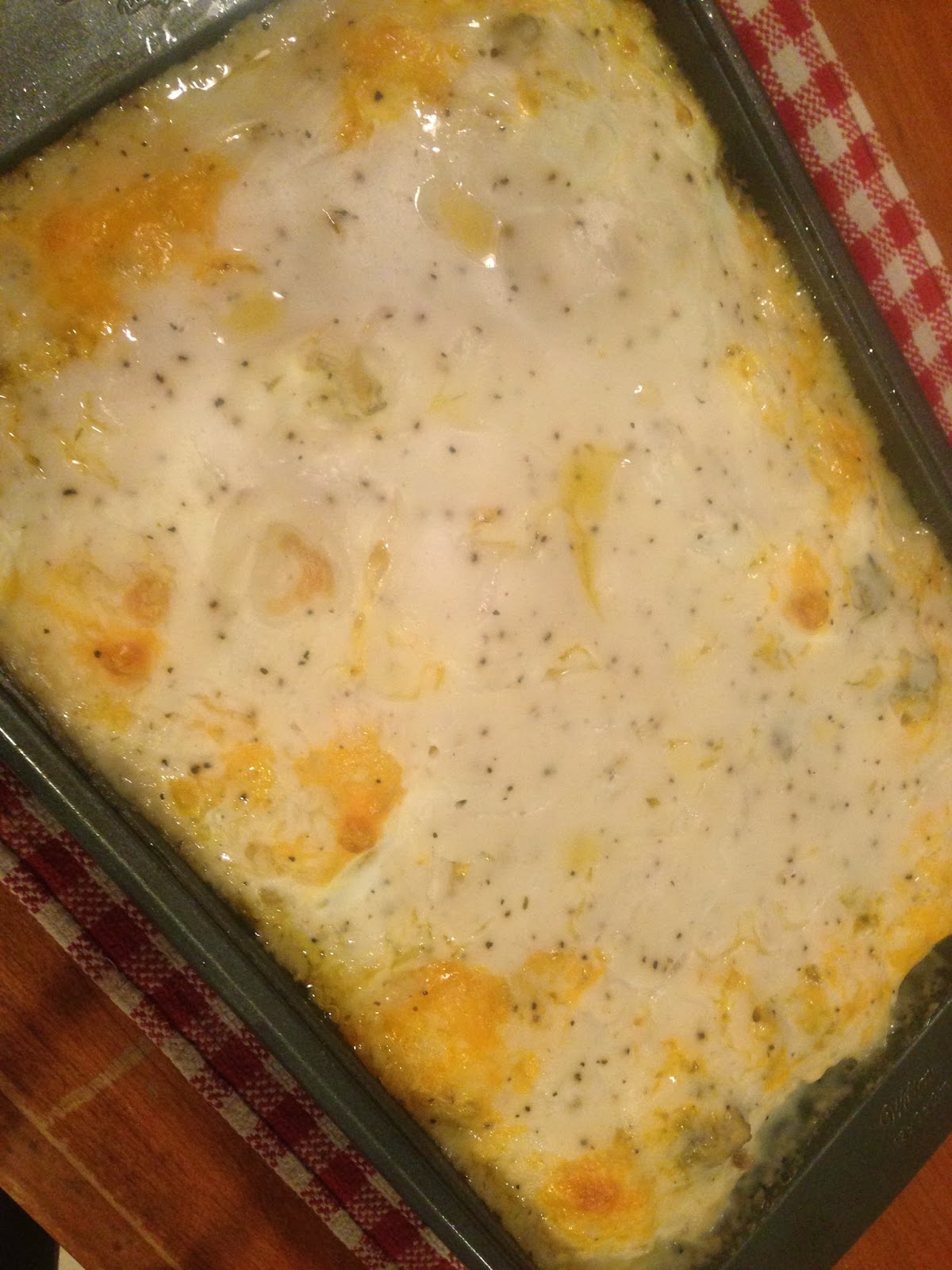